Bright orange with three distinctive white bars, clown anemonefish are among the most recognizable of all reef-dwellers. They reach about 4.3 inches (11 centimeters) in length, and are named for the multicolored sea anemone in which they make their homes.
Clownfish perform an elaborate dance with an anemone before taking up residence, gently touching its tentacles with different parts of their bodies until they are acclimated to their host. A layer of mucus on the clownfish's skin makes it immune to the fish-eating anemone's lethal sting. In exchange for safety from predators and food scraps, the clownfish drives off intruders and preens its host, removing parasites. 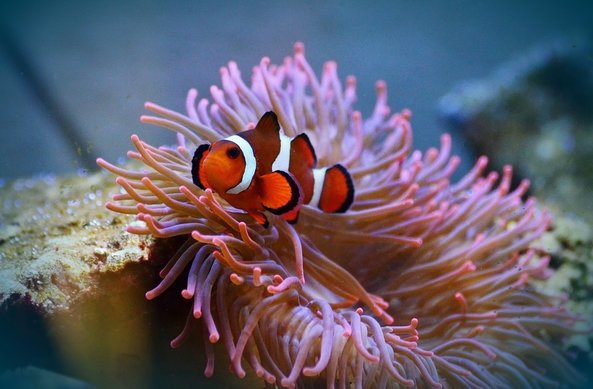 There are 28 known species of anemonefish, most of which live in the shallow waters of the Indian Ocean, the Red Sea, and the Western Pacific. They are not found in the Caribbean, Mediterranean, or Atlantic Ocean.

Surprisingly, all clownfish are born male. They have the ability to switch their sex, but will do so only to become the dominant female of a group. The change is irreversible.
Next is Brittle Star (Sea Star)
Powered by