Seahorse is the name given to 54 species of small marine fishes in the genius Hippocampus. "Hippocampus" comes from the Ancient Greek word hippos meaning "horse" and kampos meaning "sea monster". Having a head and neck suggestive of a horse, seahorses also feature segmented bony armour, an upright posture and a curled prehensile tail.

Seahorses are mainly found in shallow tropical and temperate waters throughout the world, from 45 degree South to 45 degree North and live in sheltered areas such as seagrass beds, estuaries, coral reefs, or mangroves. Four species are found in Pacific waters from North America to South America. In the Atlantic, H.erectus ranges from Nova Scotia to Uruguay, H.zosterae, known as the dwarf seahorse, is found in the Bahamas. 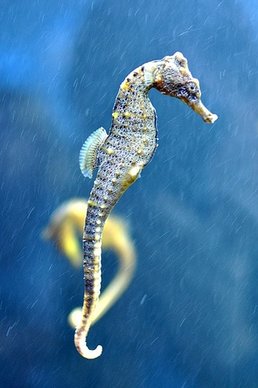 Seahorse range in size from 1.5 to 35.5 cm (0.6 to 14.0 in). They are named for their equine appearance with bent necks and long snouted heads followed by their distinctive trunk and tail. Although they are bony fish, they do not have scales, but rather thin skin stretched over a series of bony plates, which are arranged in rings throughout their bodies. Each species has a distinct number of rings.

Seahorses swim upright, another characteristic not shared by their close pipefish relatives, which swim horizontally. Razorfish are the only other fish that swim vertically. They swim upright propelling themselves by using the dorsal fin. The pectoral fins located on either side of the head are used for maneuvering. 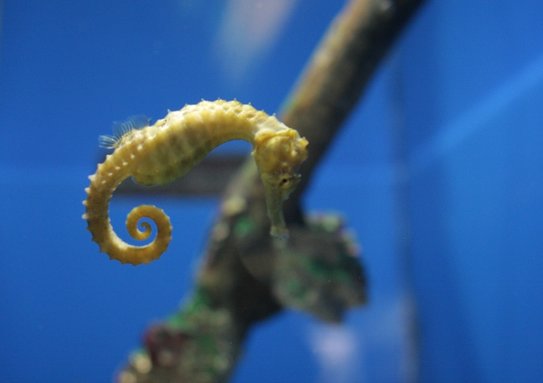 They lack the caudal fin typical of fishes. Their prehensile tail can only be unlocked in the most extreme conditions. They are adept at camouflage with the ability to grow and reabsorb spiny appendages depending on their habitat.
Unusual among fish, a seahorse has a flexible, well-defined neck. It also sports a crown-like spine or horn on its head, termed a "coronet", which is distinct for each species.
Seahorses swim very poorly, rapidly fluttering a dorsal fin and using pectoral fins (located behind their eyes) to steer. The slowest-moving fish in the world is H.zosterae (the dwarf seahorse), with a top speed of about 5 ft(1.5 m) per hour. Since they are poor swimmers, they are most likely to be found resting with their prehensile tails wound around a stationary object. They have long snouts, which they use to suck up food, and their eyes can move independently of each other like those of a chameleon. 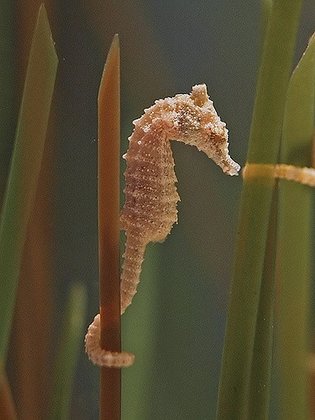 Lined seahorses are monogamous creatures. Once they form a bond with another seahorse, they perform ritual dances every morning to re-establish that bond.

Unusually it is the male, and not the female, tat becomes pregnant in seahorses. Males have an incubation or 'brood' pocket on the lower side of the tail, into which female lined seahorses lay between 250 and 650 eggs during courtship, depending on the size of the individual.
Next is Clown Fish
Powered by