Eels are not snakes - they are actually fish and live in holes or caves and are highly territorial. They will defend their cave from intruders and will only venture out briefly to catch passing prey. Eels are generally not aggressive and are only likely to bite you if you reach into the cave in which they're hiding.

Although moray eels are non-venomous, their flesh often contains a toxic substance (ciguatoxin) that is produced by marine algae. If carnivores,  including eels, prey on herbivorous animals that have grazed on these algae, the toxins are transferred and stored in higher concentrations in the predator's tissues. Moray eels are therefore a potentially deadly meal for humans and are therefore seldom eaten. 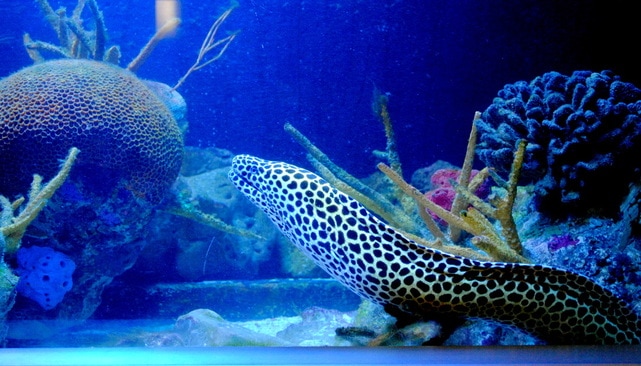 Although they feed mostly on small fish and octopuses, they sometimes take prey that's too large to be swallowed. When this happens, an eel will clamp its jaws onto the prey, knot its tail and move the knot towards its head. The knot is then pushed against the prey while the head is pulled back through the knot, enabling the eel to rip off a bite-sized piece of prey

The saying "slippery as an eel" is extremely apt because eels have a coating on their skin that makes them not only slippery but also able to maneuver in and out of the sharp corals.
Next is Desjardin's Sailfin Tang
Powered by