The Great Lakes are a series of interconnected freshwater lakes located in northeastern North America, on the Canada-United States border, which connect to the Atlantic Ocean through the Saint Lawrence River. Consisting of Lakes Superior, Michigan, Huron (or Michigan-Huron), Erie, and Ontario, they form the largest group of freshwater lakes on Earth, containing 21% of the world's surface fresh water by volume. A great way to remember the lakes is the acronym HOMES, Huron, Ontario, Michigan, Erie, Superior.

The total surface is 94,250 square miles (244,106 sq. km), and the total volume (measured at the low water datum) is 5,439 cubic miles (22,671 cubic km). Due to their sea-like characteristics (rolling waves, sustained winds, strong currents, great depths, and distant horizons) the five Great Lakes have also long been referred to as inland seas. Lake Superior is the second largest lake in the world by area, and Lake Michigan is the largest lake that is entirely within one country. 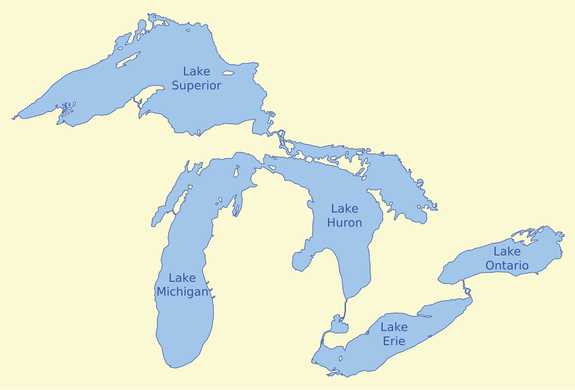 The Great Lakes began to form at the end of the last glacial period around 14,000 years ago, as retreating ice sheets carved basins into the land and they became filled with meltwater. The lakes have been a major highway for transportation, migration and trade, and they are home to a large number of aquatic species. Many invasive species have been introduced due to trade, and some threaten the region's biodiversity.

Next is The Food Chain
Powered by