The Arowana is a facultative air breather and can obtain oxygen from air by sucking it into its swim bladder, which is lined with capillaries like lung tissue are carnivores, often being specialized surface feeders. They are excellent jumpers; Osteoglossum
species have seen leaping more than 6 ft (almost 2 m) from the water surface to pick off insects and birds from overhanging branches in South America, hence the nickname "Water monkeys". Arowana species typically grow to around 2 to 3 ft in captivity.

Several species of osteoglossids exhibit parental care. They build nests and protect their young after they hatch. All species are mouthbrooders, the parents holding sometimes hundreds of eggs in their mouths. The young may take several tentative trips outside the parent's mouth to investigate the surroundings before leaving permanently.

The electric eel (Electrophorus electricus) is an electric fish, and the only species in that genus. Despite the name, it is not an eel, but rather a knifefish. They in habit areas that are often oxygen deficient and may disappear during the dry season, therefore they must breathe air in order to stay alive, making them obligate air breathers. 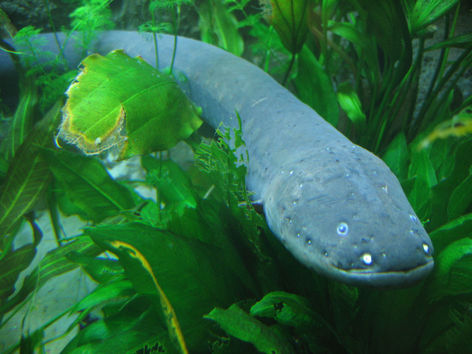 Next is the Great Lakes of Africa
Powered by