The Aquarium has several displays with "live, and local" invasive non-native species.  These include a tank that displays white perch, round goby, and models of zebra mussels and quagga mussels on the sunken hull of a shipwreck.  Round gobies, which lack a swim bladder, lay in wait or "hop around" on the bottom, ready for any opportunity for a meal.  Given the chance, they will vigorously swarm over and destroy an unguarded bass nest or eat any edible detritus sinking from above.  In contrast, the white perch frequently swim in schools and are aggressive predators of small fish. For people who fish, the white perch "steal the bait" from more desirable catch, such as yellow perch.  Come to the Aquarium to see these fish and others, in person.

Invaders in the News 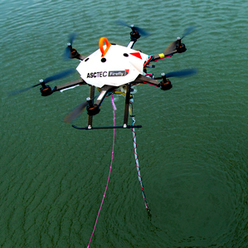 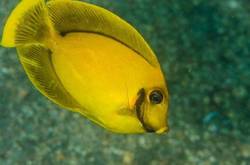 Divers Knew Their Fish!
Divers in Florida helped identify and capture an invasive chocolate surgeonfish when they noticed a fish that didn't belong. [Photo credit: Deb Devers, Miami Herald - Jan. 10, 2015]. Read article.
Creation of the above page was funded in part by the Michigan Invasive Species Grant Program through the Departments of Natural Resources, Environmental Quality, and Agricultural and Rural Development.