Coral reefs are diverse underwater ecosystems held together by calcium carbonate structures secreted by corals. Coral reefs are built by colonies of tiny animals (polyps) found in marine waters that contain few nutrients. Most coral reefs are built from stony corals, which in turn consist of polyps that cluster in groups. The polyps belong to a group of animals as Cnidaria, which also includes sea anemones and jellyfish. Unlike sea anemones, corals secrete hard carbonate exoskeletons which support and protect the coral polyps. 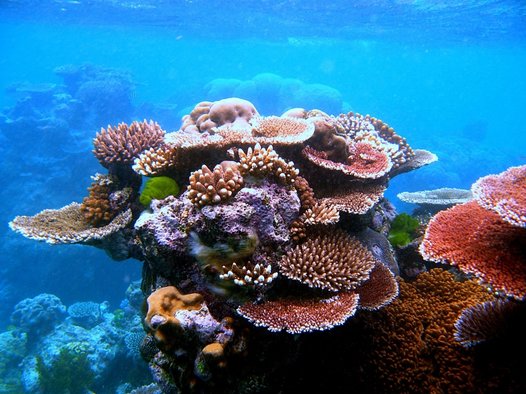 Often called "rainforests of the sea", shallow coral reefs form some of the most diverse ecosystems on Earth. They occupy less than 0.1% of the world's ocean surface, about half the area of France, yet they provide a home for at least 25% of all marine species, including fish, mollusks, worms, crustaceans, echinoderms, sponges, tunicates and other cnidarians.

Paradoxically, coral reefs flourish even though they are surrounded by ocean waters that provide few nutrients. They are most commonly found at shallow depths in tropical waters, but deep water and cold water corals also exist on smaller scales in other areas
Coral reefs are estimated to cover 284,300 sq. km (109,800 sq mi), just under 0.1% of the oceans' surface area. The Indo-Pacific region (including the Red Sea, Indian Ocean, Southeast Asia and the Pacific) account for 91.9% of this total. Southeast Asia accounts for 32.3% of that figure, while the Pacific including Australia accounts for 40.8%. Atlantic and Caribbean coral reefs account for 7.6%

CORAL REEF LOCATIONS
Although corals exist both in temperate and tropical waters, shallow-water reefs form only in a zone extending from approximately 30 degrees North to 30 degrees South of the equator. Tropical corals do not grow at depths of over 50 meters (160 ft). The optimum temperature for most coral reefs is 26-27 degree Celsius (79-81 degree Fahrenheit), and few reefs exist in waters below 18 degree Celsius (64 degree Fahrenheit). However, reefs in the Persian Gulf have adapted to temperatures of 13 degree Celsius (55 degree Fahrenheit) in winter and 38 degree Celsius (100 degree Fahrenheit) in summer.
Deep-water coral can exist at greater depths and colder temperatures at much higher latitudes, as far north as Norway. Although deep-water corals can form reefs, very little is known about them
Coral reefs are rare along the west coasts of the Americas and Africa, due primarily to upwelling and strong cold coastal currents that reduce water temperatures in these areas ( respectively the Peru, Benguela and Canary streams ). Corals are seldom found along the Coastline of South Asia - from the eastern tip of India (Chennai) to the Bangladesh and Myanmar borders - as well as along the coasts of northeastern South America and Bangladesh, due to the freshwater release from the Amazon and Ganges Rivers respectively.

The Great Barrier Reef - largest, comprising over 2,900 individual reefs and 900 island stretching for over 2,600 kilometers (1,600 mi) off Queensland, Australia. 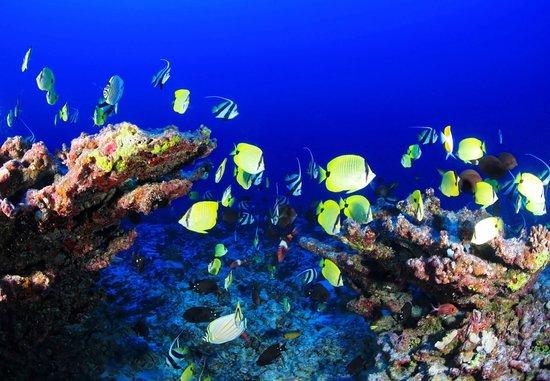 The Florida Reef Tract - largest continental US reef, extends from Soldier Key, located in Biscayne Bay, to the Dry Tortugas in the Gulf of Mexico.

Coral reefs deliver ecosystem services to tourism, fisheries and shoreline protection. The annual global economic value of coral reefs is estimated between US$29.8-375 billion. However, coral reefs are fragile ecosystems, partly because they are very sensitive to temperature. They are under threat from climate change, oceanic acidification, blast fishing, cyanide fishing for aquarium fish, sunscreen use, overuse of reef resources, and harmful land-use practices, including urban and agricultural runoff and water pollution, which can harm reefs by encouraging excess algal growth.
Next is Tessalata Morey
Powered by